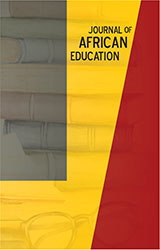 This paper is significant because it adds value to the research on higher education, and to the discourse on promotion to associate professorship in particular. Furthermore, it exposes dichotomies in the case universities on the application of the prevailing policies and their practice.

Learning pathways cannot be sealed off from one another, as though a learner is fated to stay on one route once a choice has been made. The principle of flexibility must ensure that links are available for learners to move from one pathway to another, to be credited appropriately with learning achievements that are relevant to the new pathway and be afforded the 3 opportunity to acquire additional learning that would enable the learner to make an efficient transition” (Department of Education (DoE) and Department of labour (DoL) 2003: 14).
Two departments in South Africa has come together to give direction on vertical articulation learning pathways, with emphasis on flexibility, transfer of credits and efficient transition. In support, (Blom, 2013: 1) defines vertical articulation as the process of “enabling mobility of learners in order for them to progress along learning and career pathways”. However, the process of vertical articulation is obscured by intra-institutional and inter-institutional factors, such as “institutional practices, incongruent regulatory requirements, structural inconsistencies, epistemological and perceptual differences and power relations” (Blom, 2013: 1). Vertical articulation is not the South African phenomenon only, but international one. International Baccalaureate organization   (2015, par 1) highlights that vertical articulation ensures that “what students learn from one year to the next takes form as a coherent and logical process that maximally supports student understanding and progression” and further stresses on significance of the various types of support for learning needed in workplaces.
This editorial responded to the research question, ‘what is the influence of vertical articulation on promotion from senior lectureship to associate professorship?’’ Vertical articulation starts at the recruitment level, and the lowest possible appointment to academia position, such as junior lectureship or lectureship. At this levels, academics are placed with Honours and Masters Degrees respectively. Then the academia is expected to move to higher levels within the selected career pathing. For example, from junior lectureship to lectureship, from lectureship to senior lectureship, from senior lectureship to associate professorship; lastly, from associate professorship to full professorship position. Therefore, vertical articulation does not have influence to promotion to any position, including an associate professorship, when it is being applied to academic staff who has been in the university system for some time. Vertical articulation is used as a career pathing tool used by learner and students; as well as the recruitment personnel for placement of academia.
‘Is the promotion policy prescriptive on vertical articulation, or was it implied? In the document analysis, it was found that the promotion policy in the case university, is not a mandatory and prescriptive, but just implied. It was not written in black and white, that vertical articulation is the mandatory prescription towards appointment of academia to any position, including the associate professorship position.
Why does it become an issue if it is not a mandatory prescription? It was found to be the issue to one faculty than to others. It is applied differently and discriminatory across the case university.
Was this a human error, or a deliberate action just applied by some managers to deny certain individuals space to higher position? In any case, what does higher promotion committee made up of higher echelons structures including vice chancellors and human resources directors say, if this discrepancy occurs? In responding to the first question, on was it a human error or deliberate action, we want to believe that it is a human error, as we cannot prove that it is a deliberate effort to         deny some individuals opportunities to higher academic positions.
The focus of this editorial was on the influence of vertical articulation on promotion from senior position to associate professorship position in the case university. These questions are beyond the scope of this editorial, and can be answered by further empirical research, involving one-to-one interviews within interpretivist paradigm, conducted among the school and faculty managers across the South African universities, and the case university in particular. This study recommends that when such empirical research is undertaken, it should further respond to the question raised in this study, namely,
What is the practice of management on the application of vertical articulation on promotion to associate professorship in the South African universities?

The university promotion policies and procedures

• “To reward excellence and to recognize potential and ability;
•To provide an incentive towards higher quality performance and achievement;
•To foster good morale amongst academic staff;
•To foster and encourage academic staff development;
•To promote on the basis of performance and merit relevant to the applicant’s discipline;
•To provide transparency in criteria, procedural processes, and decision making;
•To ensure as far as possible, balance in the ratio of staff at different grades across the different Faculties, Departments and Disciplines
•To support the principle of diversity”.
The University of Lumerick has a comprehensive policy document that informs the university procedures and practice when awarding a  promotion to the university staff members. On the other hand, Durban University of Technology (DUT)âs promotion policy was perused and the following objectives were found, namely:
•“Introduce and manage academic rank promotions;
•Provide a structure and operation that rewards scholarship [quality of teaching, strategic research, external engagement and leadership and management] and ensures continuity, relevance and fitness-for- purpose within the academic programme; and
•Provide reasonable opportunity and incentives for career-pathing, taking into consideration the difference in career paths that individuals may follow within a University of Technology (UoT) context” (Durban university of Technology, 2021: 4).

in appropriate cases a professional or other qualification, supported by research publications, could be considered (NQF level 9 qualifications). A relevant Masterâs degree or Fellowship for Dental and Medical training is mandatory (University of Limpopo, 2011: 2).

The promotion policy of the University of Limpopo has put down the mandatory requirements into the associate professorship, and doctoral degree or equivalent as well as publication were identified. The promotion policy prescribes for criteria for evaluation of teaching that stress on “teaching (learning facilitation, subject mastery and curriculum development; development of learning materials assessment); mentoring and coaching of juniors and new academic staff members; and management and administration within an education context” (University of Limpopo (UL), 2007: S2007/1279). Apart from teaching criteria this policy further postulates criteria for evaluation of research as follows:

A doctoral or equivalent degree that further prescribes that;

•External process of peer-review will confirm the status of the candidates as an established researcher;
•The research standing should be demonstrated by a sustained record of recent quality publications in peer-reviewed journals or other equivalent outputs that are considered to be a body of a coherent quality work that attest to an ongoing engagement within a specific research field;
•A minimum of five publications in SAPSE recognised accredited journals;
•Supervisor of completed Masters Students” (UL, S2007/1280).

As part of conclusion, in answering the research question on:

The research findings exposed dichotomies in the case universities on the application of the prevailing policies and their practice. It was found that one faculty management is using vertical integration (VI) to qualify and disqualify some academic staff who applied for associate professorship in the case university? The prevalence of VI usage exists.
Therefore, this editorial recommends that university highest structures and Senate Committees; and Department of Higher Education should continuously monitor alignment of university policies with South African legal and policy framework; and provide leadership on human resources issues that may cause dispute and result with the case university court appearances   for issues that are not mandatory requirements for promotion to associate professorship. Micro-management by some of university management should be relooked into, and be addressed before the university reputation is damaged. This editorial calls for South African external mandatory bodies such as Council of Higher Education (CHE) for reviewing of the university promotional policies and practices.

Part 2: Contents of the issue

Journal of African Education Volume 2 Issue 2 (JAE, 2(2) presents an editorial section and nine papers that advance African scholarship. The editorial section was authored by Kgomotlokoa Linda Thaba- Nkadimene; Cephas Makwara and Duduzile Mzindle, and reports on the influence of vertical articulation on promotion to associate professorship in one rural university in South Africa.
The first paper is titled, “the fourth industrial revolution and COVID-19 pandemic in South Africa: the opportunities and challenges of introducing blended learning in education”, authored by David Mhlanga.
The second paper is titled, “re-envisioning the education system for 4IR: exploring the experiences faced by first entering students from rural-based institutions on the use of digital learning during the coronavirus pandemic in Limpopo province, South Africa” authored by J Mawere, R.M. Mukonza and S.L. Kugara.
The third paper is titled “graduate perceptions on the scope of university entrepreneurship education in a turbulent economy: case of CUT, Zimbabwe” authored by Mirriam Jengeta and Maxwell A. Phiri.
The fourth paper is titled, “successful intervention or unnecessary hurdle: a newly introduced prerequisites impact on student performance in managerial accounting” authored by Alastair Marais and Tarish Jagwanth.
The fifth paper is titled, “review of literature on knowledge of the postgraduate supervision process and teaching Research Method in Business Management in South Africa” authored by Mfazo Cliford Madondo.
The sixth paper is titled, “factors of effective postgraduate student- supervisor relationships at selected universities in South Africa” authored by Sakhiseni Joseph Yende.
The seventh paper is titled, “optimizing multimodality in the teaching of literature in English at advanced level in Zimbabwean schools” authored by Nancy Nhemachena, Erick Nyoni,
The eight paper is titled, “intersectional factors contributing to learner violent behaviour in one high school of Malamulele Circuit” authored by Thulani Andrew Chauke, Khashane Stephen Malatji & Lydia Kgomotso Mphahlele.
The  ninth  paper  is  titled,  “The  influence  of  state  demands  for accountability on varying faculty in making pedagogical decisions: Recommending a model for professional lecturer autonomous teaching” authored by Kimoga Joseph